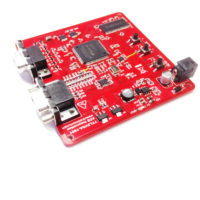 Industrial Video Converter x2VGA:
replacing of a CRT monitor with a LCD monitor on APM and Protti knitwear machines

x2VGA video converter has been tested on several industrial machines. In the following two videos the substitution of two LCD monitors on APM and Protti knitwear machines is shown.
The CRT monitor has been replaced with a brand new LCD monitor. Upon request, it is possible to provide an open frame 10” LCD monitor, so that you can place  the converter right in the case of the machine, instead of the old CRT monitor.